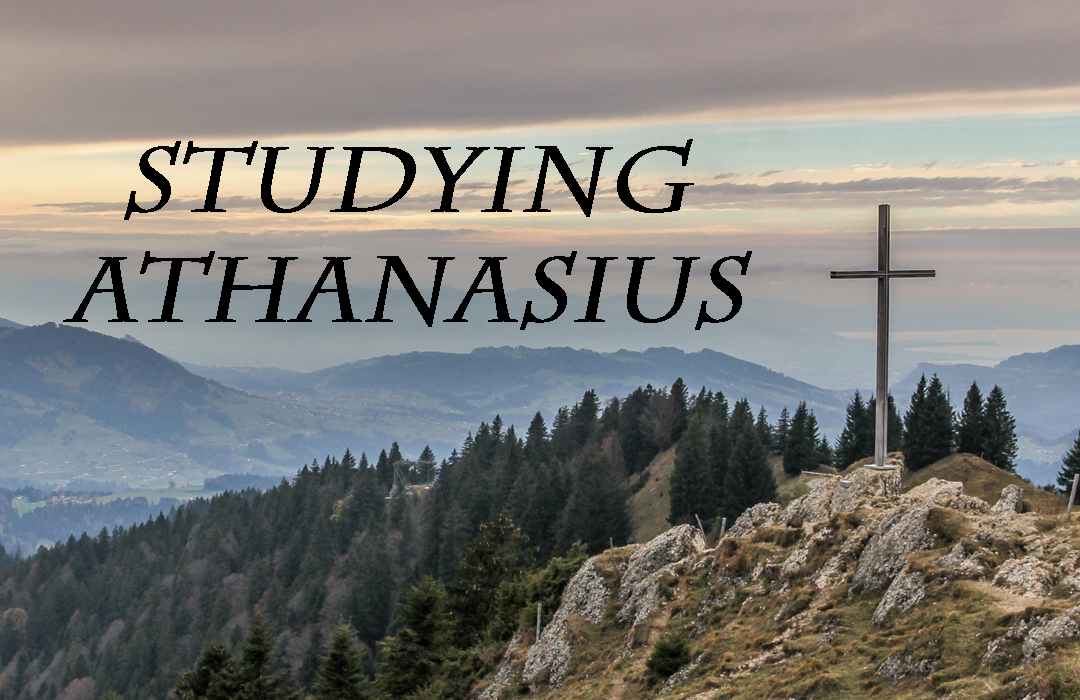 Athanasius, an early Church Father, was born sometime during 296–300 A.D. in Alexandria, Egypt. The city of Alexandria played a pivotal role in the Eastern Roman Empire as a center of education, home to the famed Library of Alexandria, and as a strategic hub of commerce with two large harbors. Athanasius grew up during the reign of Diocletian, emperor of the Eastern Roman Empire and his successor Galerius, both of whom violently persecuted Christians because Christians refused to worship the Roman gods and claimed to serve a kingdom not of this world. As a young child, Athanasius saw followers of Christ driven from their homes, tortured, and martyred.

Later as a young adult, Athanasius studied under Alexander, bishop of Alexandria and engaged in the great Trinitarian strife known as the Arian controversy. Arius, a priest in Alexandria, denied the divinity of Jesus and taught the heresy that since Jesus was the Son of God, as a son he had to have a beginning and thus was a created being. He confused many in the early Church by falsely teaching that God the Father alone was truly God, and that Jesus his Son was not God, but instead was the first and greatest creature made by the Father to accomplish man’s salvation. Bishop Alexander opposed Arius and fought to maintain the true deity of the eternal Christ. In God’s providence at the time of this controversy, the reigning emperor, Constantine, became the first Roman emperor to profess Christianity. To address the Church’s strife over Arius’ anti-Trinitarian views, in 325 A.D. Constantine called all Christian bishops throughout the known world to attend the Council of Nicaea to settle the dispute about who Jesus was — a created being or God.

For many bishops who suffered for their faith in Christ during the reigns of emperors Diocletian and Galerius, it was of utmost importance to reach a precise understanding of who Jesus was. Athanasius attended the Council of Nicaea in a support role to bishop Alexander and witnessed the seriousness of the debates, which doubtlessly shaped him as a theologian and writer. The Council of Nicaea summarized their conclusions in the Nicene Creed and on the point in question of Jesus’ divinity stated: “We believe in one God, the Father Almighty, Maker of things visible and invisible. And in one Lord Jesus Christ, begotten not made, being of one substance (homoousios) with the Father.” In The History of Christian Doctrines, Louis Berkhof notes the significance of these conclusions, “This was an unequivocal statement. The term homoousios could not be twisted to mean anything else than that the essence of the Son is identical with that of the Father. It placed him on a level with the Father as an uncreated Being.”

The accurate description of Jesus in the Nicene Creed has been a great gift to the Church; however, in Athanasius’ time, the controversy of whether Jesus was truly God or merely a created being was not settled by the drafting of the Nicene Creed. Many objected to emperor Constantine’s meddling in the Church’s controversies. Arius continued to teach his heresies, and the Church was still partly Arian and predominantly semi-Arian — the false teaching that the Son is of similar substance with the Father (homoiousios) instead of the biblical teaching that the Son is of the same substance with the Father (homoousios). After his mentor Alexander’s death, Athanasius became bishop of Alexandria. It became Athanasius’ life work to combat Arius’ anti-Trinitarian views and to instruct the Church on a biblical understanding of the Trinity. He endured exile five times for championing the truth and for refusing to compromise on the divinity of Christ. Since the Church was predominantly semi-Arian and emperors often sided with the majority to stay in political power, Constantine exiled Athanasius on November 11, 335 to Trier. During this first exile, historians estimate that Athanasius wrote his greatest work, On the Incarnation.

In 61 pages, Athanasius masterfully expounds on how the second member of the Trinity, the Word of God, was born as a man, Jesus Christ, to die for sinners and to conquer death. Do not be misled though by the title of this work; this compact book contains far more than the subject of the Incarnation. This treatise is a masterpiece because with simplicity and precision Athanasius explains the Incarnation in the context of creation, salvation, redemption, the death and resurrection of Christ, the victory over death, the sanctification of believers, and the anticipated consummation of all things in the second coming of Christ and the resurrection of the dead. In addition to exploring these rich biblical truths, Athanasius addresses the naysayers of his day by refuting the unbelief of the Jews and the mocking of the Gentiles, and he calls both groups to abandon the “illusion of idols” and to recognize the divinity and power of the Son of God.

Rich in Theology and Devotional in Nature

When I read the opening paragraph of this work, I was struck by the pastoral tone of Athanasius’ address, “Come now, blessed one and true lover of Christ.” From the outset, he communicates that his purpose in writing about the Word becoming flesh is for the Christian reader to grow in “greater and fuller piety towards” Christ. This treatise is not a mere collection of theological facts, but instead a vehicle for the Christian to grow in understanding of the significance of the Word of God manifesting himself in bodily form to man. In studying this material, Athanasius’ aim is for the lover of Christ to be “struck with exceeding awe” at the wisdom and mercies of God.

To help us worthily reflect on the Incarnation, Athanasius begins by exploring the subject of creation. He points to Hebrews 11:3: “By faith we understand that the worlds were framed by the Word of God, so that what is seen was not made out of things which appear.” As we consider the pre-incarnate Word’s role in creation — that by the Word all things were created, that he is before all things, and that in him all things hold together — Athanasius helps us to see the incomparable greatness, majesty, and power of the Word. In this section, he also discusses the origin of human beings and man’s desperate predicament of being dead in his sins. He writes, “that you might know that our own cause was the occasion of his descent and that our own transgression evoked the Word’s love for human beings, so that the Lord both came to us and appeared among human beings. For we were the purpose of his embodiment, and for our salvation he so loved human beings as to come to be and appear in a human body.”

By discussing man’s need for redemption, Athanasius shows the biblical correlation between the subjects of salvation and Incarnation. He further points out that the pre-incarnate Word was incorporeal, incorruptible, and immaterial. Since the eternal Word was incapable of death, he took on a body capable of death to redeem sinners (1 Corinthians 15:21-22, Hebrews 2:9-10). This is the wonder of the Incarnation — the Word, who begot life to everything, was born as a man and sojourned on earth as a human being to reveal the Father to us and to purchase us with the price of his own precious blood. In Christ’s ignominious death on the cross, Athanasius shares that the Son of God “destroyed death, granted incorruptibility to all through the promise of the resurrection, raising his own body as first-fruits of this and showing it as a trophy over death.” As we meditate on the biblical reality that the resurrected body of Christ is the trophy over death, we marvel at the Incarnation and worship our Savior who is the mighty God-Word: “For from him and through him and to him are all things” (Romans 11:36).

Athanasius packed this little book with theology and simultaneously achieved creating a work that is devotional in nature and tone.  One of the delights I find in reading old books is the invitation to glimpse into the culture and time period of the author’s life.  Peppered throughout On the Incarnation are references to a great company of martyrs, men and women of Athanasius’ time who were emboldened to suffer for Christ. The resurrected body of the Savior gave these early Christians great hope and boldness to face persecution.

Athanasius adds a final layer to this treatise by addressing the detractors of his day who slandered and mocked the Incarnation. In response to the Jew’s unbelief, he argues from the Old Testament showing that the Scriptures foretold of the coming of Christ. And to the Greeks who scoff at the Incarnation, Athanasius supplies an apologia of the superiority of Christ over the sophistry of the Greeks. These inclusions demonstrate how Athanasius was not sitting in an ivory tower writing theology, but instead he confronted the unbelief in his day and proclaimed the supremacy of Christ over all.

Athanasius was a great champion for protecting the biblical truth that Jesus, the Son of God, is of one substance and equal with the Father. He labored to help the Church understand that Jesus is both fully God and fully man. His five exiles, totaling 17 years of expulsion at the command of four different Roman emperors, illustrate that the Latin name he is known by in history “Athanasius Contra Mundum” or “Athanasius Against the World” is a fitting epitaph for this servant of God.

The translation of On the Incarnation published by St. Vladimir’s Seminary Press includes an outstanding preface by C.S. Lewis, which is a worthy read on its own. Lewis urges Christian readers to step outside of their century to read the “old books.”  On Athanasius’ contributions, Lewis writes: “He stood for the Trinitarian doctrine, ‘whole and undefiled,’ when it looked as if all the civilized world was slipping back from Christianity into the religion of Arius — into one of those ‘sensible’ synthetic religions which are so strongly recommended today and which, then as now, included among their devotees many highly cultivated clergymen. It is his glory that he did not move with the times; it is his reward that he now remains when those times, as all times do, have moved away.”

As we reflect on the advent of Christ this Christmas season, consider picking up On the Incarnation to prepare your heart to worship and reverence the Word who became flesh to save us from our sins.