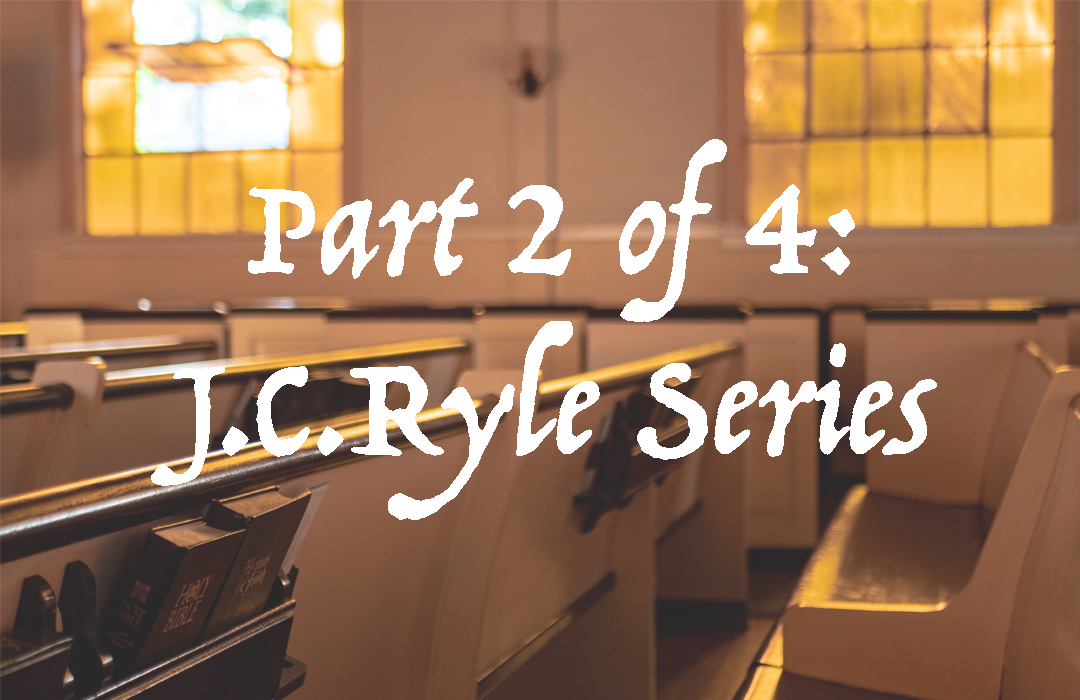 At the age of sixty-one in 1877, J. C. Ryle published Holiness. By this time, thirty-six years had passed since he first became a minister of the gospel. A seasoned shepherd, he was in his fourth pastorate at Stradbroke in the Church of England. There he had cut into the pulpit the text, “Woe is unto me if I preach not the gospel.” To underscore the gravity of these words, with his own hands he carved a deep groove under the word “not.”

Committed to preaching God’s Word with authority and without apology, J. C. Ryle faced stiff opposition. In the Church of England, the Tractarian movement sought to undermine the supremacy of Holy Scripture and to reintroduce ritualism into the church, seeking to push her back to Roman Catholicism. Ryle stood boldly against these false measures and faithfully taught his congregation from Scripture. Not only did he emphasize the doctrines of grace, he also desired to see the people under his care grow in sanctification, in personal holiness.

This led Ryle to gather many of his sermons and tracts that had been previously published and to assemble them into one comprehensive work Holiness. In 471 pages, Ryle writes with compelling force on why the pursuit of holiness is of paramount importance to the Christian. He demonstrates that holiness is a trait in the family of God; it is the familial likeness of being a child of the Most High. Those who love Christ long to put to death sin in their lives and yearn to become conformed to his image.

Over 140 years after its initial publication, Ryle’s book has become a classic work on sanctification for three reasons: First, this book has endured because Ryle directs Christian readers to Scripture passages that scrutinize our hearts and lay bare our interior thoughts, causing us to ponder why God’s Word says, “Holiness without which no one will see the Lord” (Heb. 12:14). Second, Ryle plainly shows that growth in grace is a daily spiritual battle, a fight that will cost us our love of sin, ease, and the favor of the world. And third, Ryle proposes unexpected examples from Scripture to model faith in Christ and to warn against unbelief—he calls the thief on the cross Christ’s greatest trophy and bids us to “remember Lot’s wife” (Luke 17:32).

What Is Practical Holiness?

To convince the Christian of the necessity to pursue holiness, Ryle sets forth Hebrews 12:14: “Holiness without which no one will see the Lord.” Reading this verse prompts us to ask ourselves two solemn and searching questions: Are we holy? And shall we see the Lord?

Such a verse seizes our attention and emphasizes God’s priorities for his people. For the holy God, holiness must be a prized trait and diligent pursuit of those who belong to him. But what is true practical holiness? Ryle explains that holiness is being of one mind with God, loving what God loves and hating what he hates. It is measuring everything in this world by his holy Word, evaluating all thoughts and ideas in the light of Scripture. Furthermore, holiness in the believer is a hearty desire to do God’s will and a hearty agreement with his will found in his Word (see Rom. 7:22; Ps. 119:128).

One quality that I admire in Ryle’s writing is how he helps me to see the perspicuity and simplicity of God’s Word. In 1 Thessalonians 4:3, the apostle Paul plainly commands: “For this is the will of God, your sanctification.” Because “he who called you is holy, you also be holy in all your conduct” (1 Peter 1:15). When we are united to Christ by faith, we find that not only has God freed us from the guilt of sin, but also he has broken the power of sin in our lives. Ryle shares that Christ is the root, the main spring of holiness, and those who love Christ will seek to keep his commandments (see John 14:15). This desire to do what pleases God is the evidence of belonging to him.

The Fight for Holiness

After establishing the importance of holiness in the life of the Christian, Ryle demonstrates that a believer must fight to be holy. The apostle Paul commands: “Fight the good fight of the faith” (1 Tim. 6:12). What is this fight? Who is the enemy? Ryle argues that true Christianity is a fight against the world, the flesh, and the devil. The Christian must strive against the temptation to flow with the current of the world’s thinking and ways; he or she must be daily aware that “friendship with the world is enmity with God” (James 4:4). Next, the believer must struggle against the flesh, taking care not to underestimate the formidable opponent of indwelling sin; he or she must daily heed Christ’s charge to “watch and pray” (Matt. 26:41). And finally, the Christian must be mindful of the unseen enemy, the devil; to battle this adversary, he or she must daily “put on the whole armor of God” (Eph. 6:11).

One of the delights I find in reading Ryle’s works is his ability to draw forth the rich meaning in a Bible text. By emphasizing the metaphoric language in 1 Timothy 6:12, Ryle demonstrates how God’s Word compares the Christian life to a battle and the Christian to a solider. From these metaphors, we learn that we are “not meant to live a life of religious ease, indolence, and security.” [1] Pursuing holiness will cost us our love of sin, ease, and the favor of the world.

Lest we become discouraged in this perpetual battle, Ryle exhorts that it is the “fight of the faith”—faith in the person, work, and offices of Christ. The secret to a Christian soldier fighting successfully is a “habitual lively faith in Christ’s presence and readiness to help.” [2] As the Son of Man, Jesus understands our weak bodies and our infirmities. As the Son of God, Jesus acts as our advocate and powerfully intercedes for us at the right hand of God.

Lastly, Ryle directs our attention to one simple word in 1 Timothy 6:12 that swells with encouragement. He reminds us that this is a “good” fight because we fight under the best of generals, our divine captain, the Lord Jesus Christ. We are not orphans in this spiritual battle: Christ is our king, and we wage war under his banner.

To further help the Christian reader to gain a deeper understanding of holiness, Ryle presents unexpected examples of men and women from Scripture. At first glance, Ryle’s choices appear to be unlikely candidates, but it is precisely these unexpected choices which make Holiness an insightful read and why this work is a classic. In chapter 11 “Christ’s Greatest Trophy,” Ryle explores the conversion of the thief on the cross. He presents the thief’s faith in Christ as a model for all Christians to imitate. What can a thief, who was mercifully saved in his last hours, teach us about faith and holiness?

First of all, consider that while Jesus hung bleeding and condemned on the cross, rejected by his own people and numbered among transgressors, the thief rightly perceived that Jesus was innocent, saying, “This man has done nothing wrong” (Luke 23:41) Second, consider that as Jesus appeared most weak, his body racked with pain, the thief prayed to him, “Jesus, remember me when you come into your kingdom” (Luke 23:42). The thief believed that Jesus had a kingdom, was king, and could grant him eternal life.

Third, ponder when this happened—after the entire people of Israel, including the chief priests, had cried, “Away with [Jesus], crucify him . . . we have no king but Caesar” (John 19:15). At the cross, although there were no outward signs of Jesus’s dominion, glory, or majesty, the thief believed and looked forward to Christ’s kingdom. This is faith to imitate. Holiness is rightly seeing who Jesus is and trusting that he is mighty to save.

Along with the thief, Ryle bids us to “remember Lot’s wife” (Luke 17:32). What can a woman who was turned into a pillar of salt teach us about holiness? Ryle points out that Christ spoke this warning to his disciples while teaching them about his second coming and the awful state of unreadiness some will be found in at his return. Instead of simply commanding the disciples, “Do not be like Lot’s wife,” Jesus says, “Remember Lot’s wife.” The verb remember nudges our lazy minds to look back to God’s judgements and to recall his works.

We remember that she was married to Lot, a righteous man. Belonging to one of the few families God had revealed himself to in the old covenant, she enjoyed religious privileges that many did not have. When the angels came to warn her husband that God would destroy Sodom, she heard their command, “Do not look back” (Gen. 19:17). But she disobeyed, and her punishment was immediate death, not even time to repent. The great lesson to be learned from Lot’s wife, Ryle asserts, is that mere possession of outward religious privileges—sitting under great preaching, belonging to a Christian family—do not indicate a person is saved. Lot’s wife teaches us to not be careless about eternal things and to never put off repentance.

Through the centuries, God has gifted the church with pastors to mine his Word and bring forth its riches. Ryle’s particular gift as an author is his ability to communicate God’s Word with expressive force and urgency. In Holiness, he captures the priority God places on his people to be “a chosen race, a royal priesthood, a holy nation, a people for his own possession” (1 Peter 2:9). By emphasizing the supremacy of Christ and the necessity of having personal faith in him, he demonstrates that Christ is the root, the main spring of holiness. With pastoral insight, Ryle urges God’s people to fight and press on for the maturity that is ours in Christ. Holiness is available on Amazon and in the Church Library.