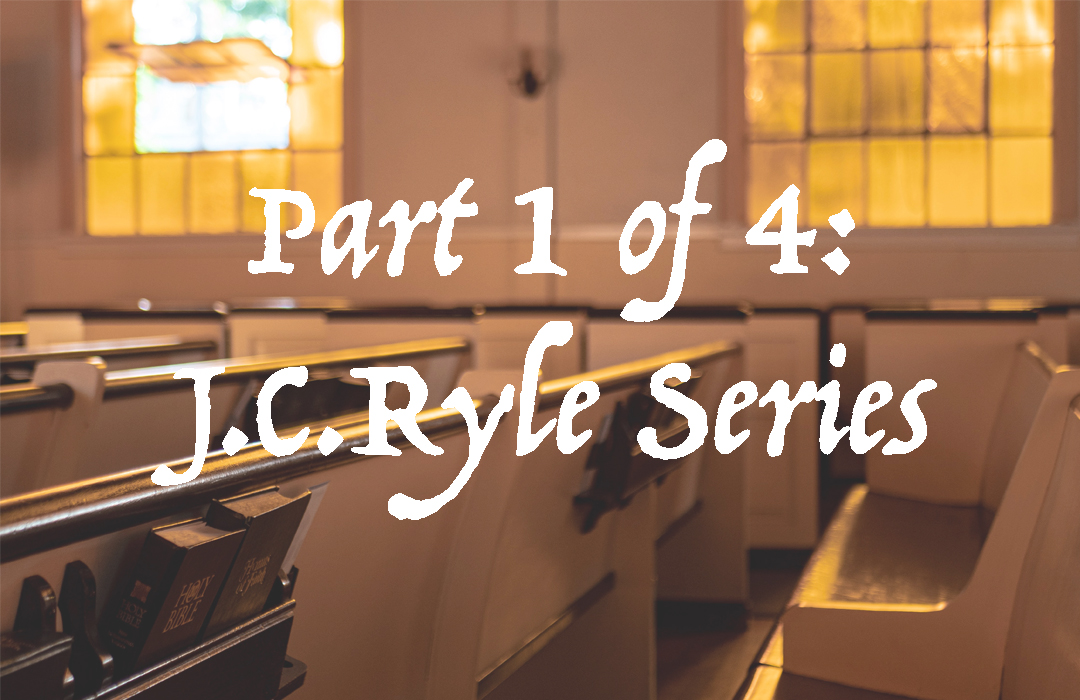 J.C. Ryle, a man intensely loved and intensely hated, was a country pastor and then bishop of Liverpool in the Church of England. As a contemporary of Charles Spurgeon, Ryle lived through challenging times—first, though church attendance abounded in England, Ryle perceived there was little true religion in the land; second, as a firm evangelical committed to teaching the doctrines of grace, he faced stiff opposition in the Anglican Church. In short, Ryle was loved by those who held God’s Word as the only rule for life and faith, and hated by those who sought to push the Church of England back into Roman Catholicism.

What made Ryle “bold as a lion for the truth”? [1] In a four-part series, we will explore these works by Ryle and discover how God prepared this man to stand boldly for biblical truth:

Born in 1816, Ryle grew up as the fourth of six children and the oldest son to John Ryle, a wealthy banker and landowner. His father was worth fifteen thousand to twenty thousand pounds a year. If you consider Mr. Darcy from Jane Austen’s Pride and Prejudice and his swoon-worthy annual income of ten thousand pounds, you will see the league that Ryle was born into.

Life at Eton and Oxford

From this background, Ryle enjoyed a privileged education, attending Eton College and the University of Oxford. At Eton he was a voracious reader, distinguished himself as a cricketer, took a prominent role in the Debating Society, and mastered Latin and Greek. His composition of classical poetry was often “sent up,” a tradition of outstanding work being sent to the headmaster for distinction. In his autobiography, Ryle remembered Eton as a perfect republic: “Rank and title, and name, and riches went for nothing at all, and a boy was valued according to his cleverness, or boating powers, or cricketing skill, or bodily strength, or good nature, or general agreeableness, or pleasantness, and for nothing else at all.” [2]

In October 1834, Ryle entered Christ Church, the most prestigious college at Oxford. A complete contrast to Eton, Ryle described it as: “Nothing disgusted me so much as the universal idolatry of money, rank, and aristocratic connexion. I never saw such an amount of toadying, flattering, and fawning upon wealth, and title, as I saw amongst the undergraduates at Oxford. It thoroughly revolted me.” [3] God fashioned Ryle’s character with a strong independent streak—he refused to be a sycophant and did not care for other men’s opinions.

At Oxford Ryle was awarded first class honours. To qualify, a man had to face rigorous scrutiny which included oral examination in sixteen of the best Latin and Greek authors, logic, ethics, rhetoric, and moral philosophy. He also had to write compositions in original Latin and Greek. Additionally, oral examination included being tested in the 39 Articles, the Bible, the Book of Common Prayer, and church history, all in front of a large crowd of fellow undergraduates, tutors, and university men. To keep a clear mind and answer questions with speed, clarity, and mastery was no easy feat. Unknown to Ryle at this point in time, God was honing his intellect and his verbal skills to prepare him for an unexpected career.

In his final six months at Oxford while preparing for the honours examination, Ryle suffered a severe respiratory illness that confined him to bed. Brought low, he opened his Bible and genuinely prayed for the first time. Although he had been raised in a respectable home and was a churchgoer, he did not know the Lord: “I was perfectly careless, thoughtless, ignorant, and indifferent about my soul and a world to come, I certainly never said my prayers, or read a word of my Bible, from the time I was seven, to the time I was 21.” [4]

Until this point, Ryle had only known a formal religion of church attendance. Though his grandfather had been an eminent Christian, Ryle’s own father was not a true Christian and there had been no real Christian living in his home. Through a series of events set off by the illness, Ryle received Christ by Christmas 1837 and experienced a complete change. In his conversion, he faced his own personal sinfulness and utter helplessness; in Christ he found the only One entirely qualified to meet his poverty as a sinner in need of forgiveness from God.

After becoming a Christian, Ryle found himself ostracized by Oxford friends and faced discomfort in his own family. After earning his bachelor of arts, he moved home to Henbury Hall, a lush thousand-acre country estate his father recently purchased. As the oldest son, Ryle would inherit it. The next four years he prepared for a career in parliament by studying law and working in his father’s bank. From the world’s vantage point, J.C. Ryle had it all—eldest son and inheritor of a wealthy estate, premiere education and intellectual acumen, and physical stature at six feet two with a corresponding handsome appearance.

In our human eyes, wealth appears to grant security and to possess power to open doors of opportunity, and yet God’s Word warns against such thinking: “A rich man’s wealth is his strong city, and like a high wall in his own imagination” (Prov. 18:11) In June 1841, God shook Ryle’s world with the “greatest change in a temporal point of view” he would experience. [5] One summer day he woke up with all the world before him—the prospects of inheriting father’s estate, a career as a member of parliament, status as an eligible bachelor with a bright future—and then went to bed that night entirely ruined.

The stunning blow? Bankruptcy. Father’s bank failed and creditors seized everything. Henbury Hall with every last piece of furniture and knick knack was sold at auction. Ryle and his siblings were left with nothing but their personal property and the clothes on their backs. The reversal of fortunes and “the immediate consequences were bitter and painful in the extreme, and humiliating to the utmost degree.” [6] He was reduced to the level of the butlers or footmen who had served his father’s household.

Because he was a Christian, God enabled Ryle to endure this catastrophe and to bear it as God’s best. Had he not known the Lord, Ryle believed he would have committed suicide. Despite the good he knew God would bring from this disaster, he was deeply wounded: “I felt most acutely my father’s ruin, my exile from [Henbury Hall] with the destruction of all my worldly prospects, and I have never ceased to feel them.” [7]

With all prospects ruined, Ryle had to find a way to make a living. He desired to free his father from any financial concern to support him. The only path open that would bring an immediate income was to become a clergyman in the Church of England, and he took it.

In December 1841, Ryle was ordained as a minster of Christ, curate of Exbury in the Parish of Fawley with an annual living of one hundred pounds. A dreary rural area, Exbury was the exact opposite of Henbury Hall. The forests were swampy, filled with adders and vipers, and the land did not drain properly, resulting in an unhealthy climate where cases of scarlet fever and typhus multiplied.

Seven hundred people lived in the area surrounding the parish. Many were brought up as poachers and smugglers and were not accustomed to a minister inquiring about their souls. Nonetheless, Ryle put his hand to the plow, preaching twice on Sunday, holding two cottage lectures weekly in homes, superintending Sunday School, and performing regular pastoral visitation by distributing biblical tracts amongst sixty families per week. Unbeknownst to Ryle, within five years he would become an author of tracts. His writing abilities cultivated at Eton and Oxford would be used by God.

A Call to Prayer

Three years later Ryle began his third pastorate as rector at Helmingham. A contrast to Exbury, Helmingham’s surroundings echoed Ryle’s upbringing at Henbury Hall. John Tollemache, the major landowner in the village, petitioned Sir Robert Peel, the prime minister to appoint a man of his own choosing to the pulpit. Peel granted Tollemache’s request, and because Mrs. Tollemache was a devoted Christian and lover of God’s Word, J.C. Ryle was selected.

With only three hundred people in the village, life at Helmingham moved at a slow pace. Here, Ryle had the most time in his entire career to read and to write. In this quiet village, he penned the thirty-two-page tract A Call to Prayer and challenges the Christian reader with three simple words: “Do you pray?” [8]

This question reveals three qualities that I admire about J.C. Ryle’s works: (1) his writing is preeminently practical because he focuses on the basics, being in the Word and prayer, (2) his works are readable, yet deep and rich in biblical content, (3) he speaks with a pastoral voice and in his books you get the sense that a friend cares deeply about your soul.

So, do you pray? Reflecting on his ministerial experience, Ryle contends the most neglected of all Christian duties is private prayer. As a pastor well-acquainted with the depravity of the human heart, we should listen to his warnings.

Why does Ryle place such an importance on private prayer? Prayer is absolutely needful to a man’s salvation for all who receive Christ call upon him in prayer. Secondly, the habit of prayer is one of the surest signs of being a Christian. Those who belong to Christ call unto him “evening and morning and at noon” (Ps. 55:17). Conversely, Scripture reveals that a characteristic of the wicked is they “do not call upon the Lord” (Ps. 14:4). Ryle exhorts the reader.

Never be surprised if you hear ministers of the gospel dwelling much on the importance of prayer. This is the point we want to bring you to; we want to know that you pray. Your views of doctrine may be correct. Your love of Protestantism may be warm and unmistakable. But still this may be nothing more than head knowledge and party spirit. We want to know whether you are actually acquainted with the throne of grace, and whether you can speak to God as well as speak about God. [9]

Lastly, in this small booklet Ryle addresses a wide spectrum of people: the prayerless reader, the formalist who exhibits outward religion but does not know Christ inwardly, the backsliding Christian, and the believer who prays and desires to grow in prayer. With pastoral compassion, he speaks to each group and his forceful writing style captures the urgency of God’s Word. To illustrate, he asserts that Christian men fall in private first, chiefly due to a neglect of private prayer, before they fall in public. With warnings like this, Ryle commands the attention of the Christian reader and causes you to think deeply about your own prayer life.

Pick up A Call to Prayer in the Church Library or on Amazon. In thirty-two pages, Ryle will help you understand the blessings of a prayer-filled life and the grave danger of a prayerless life.